Following an address to the nation after a cabinet meeting, the US Dollar/Turkish Lira exchange rate decreased by 22.4 percent.

Turkish President Recep Tayyip Erdogan evaluated the latest developments in the Turkish economy after a cabinet meeting in the Presidential Complex in the country’s capital, Ankara.

While evaluating their savings, Erdogan stated that they will offer a new financial alternative to citizens who want to alleviate their concerns about the rise in the exchange rate.

Stating that they will reduce the withholding tax on dividend payments to be made by companies to 10 percent, Erdoğan stated that new tools will be developed with market stakeholders in order to bring gold under the pillow to the economy.

Erdogan also emphasized that Turkey has no intention of taking the slightest step back from the free market economy and foreign exchange regime. 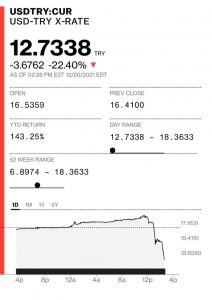