As supporters of rival Shia groups withdrew from the Green Zone in Baghdad, protesters and municipality workers began clearing the high-security area late on Tuesday afternoon.

Nearly 24 hours of chaos rocked the capital and sparked fears of nationwide civil unrest, causing the death of 28 people.

Following calls to end protests by Muqtada al-Sadr and his opponents, the Coordination Framework alliance, relative calm has been restored.

Although people remained cautious while moving around, international correspondents in Baghdad say quiet has returned to the streets.

After their political rivals, the Sadrists, dispersed, the Coordination Framework has called on supporters to end their protests and leave Baghdad’s Green Zone.

An umbrella group of parties opposed to Muqtada al-Sadr, the Iranian-backed political coalition said they have ended their sit-in.

“Return to your homes safely and be fully prepared to answer the nation’s call,” the framework said in a message to its supporters.

State media has reported that Iran reopened its border with Iraq to travelers shortly after Muqtada al-Sadr called on his supporters to withdraw from the streets.

Amid the eruption of violence on Monday, Tehran had earlier closed its borders and halted flights.

Marking the end of a 40-day mourning period for the grandson of Prophet Mohammad, Imam Hussein, millions of Iranians travel to the Iraqi city of Karbala every year for the ritual of Arbaeen. Arbaeen falls on 16-17 September this year.

State television quoted an Iranian official saying, “As security and calm have been restored in Iraq, all borders are open now.”

Shia cleric Muqtada al-Sadr’s call on his supporters to end their protest and leave the Green Zone has been hailed by Iraq’s caretaker Prime Minister Mustafa al-Kadhimi.

Al-Kadhimi said that Sadr’s call to stop violence was “the epitome of patriotism and respect for the sanctity of Iraqi blood.”

He added, “His speech emplaces national and moral duty upon all to protect Iraq and stop political escalation and violence and, to immediately engage in dialogue.”

After Muqtada al-Sadr urged his supporters to stop their activities in Baghdad and southern Iraq and return home, Basra, according to an international news agency correspondent, was calm.

Earlier on Tuesday, pro-Sadr supporters invaded the Asaib Ahl al-Haq headquarters in the heart of Basra, one of the most powerful Iraqi military groups supported by Iran. They set the headquarters on fire and destroyed the statues of the late Qassem Soleimani and Abu Mahdi al-Muhandis.

Clashes had broken out in Basra on Monday night, although no fatalities had been reported.

13:00 – After receiving a call from a cleric, Al-Sadr’s supporters begin to leave the Green Zone.

Iraq’s Joint Operations Command announced the decision to lift the curfew in Baghdad and other regions after the action.

13:00 – Iraqis received an apology from Sadr for the violence.

After nearly two days of deadly fighting, Muqtada al-Sadr has expressed regret to the Iraqi people.

In a televised speech, Sadr claimed, “This is not a revolution [any longer] because it has lost its peaceful spirit. He continued, “Iraqi blood must not be shed.

Sadr urges supporters to leave the legislature right away.

During a press conference in Najaf, prominent Shia cleric Muqtada al-Sadr urged his followers to leave the Iraqi parliament.

Sadr urged his supporters to leave within the next 60 minutes and added that no peaceful protests or sit-ins will be tolerated.

12:00 – Supporters called on by Al-Sadr to withdraw from parliament immediately

During a news conference in Najaf, the influential Shia cleric Muqtada al-Sadr has called on his supporters to withdraw from Iraq’s parliament.

Adding that not even a sit-in or peaceful demonstration would be allowed, Sadr told his supporters to withdraw within the next 60 minutes.

According to military officials in the Green Zone, the capital’s unrest on Tuesday resulted in 28 fatalities and 750 injuries in Baghdad. 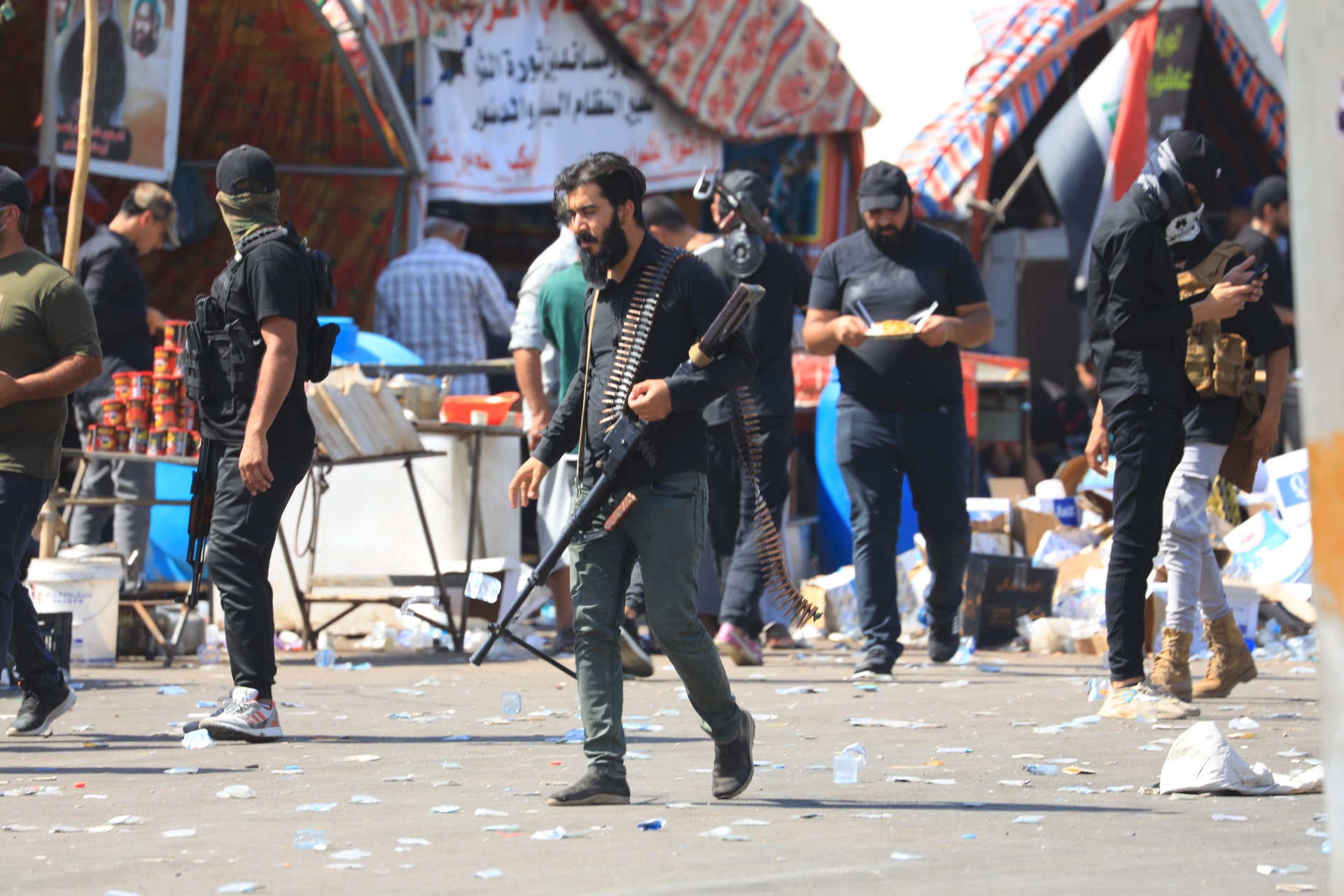 12:00 – Iran suspends flights and shuts down its borders with Iraq

In light of the continued unrest in Baghdad and the south of Iraq, Iran has closed its borders with that country and advised its residents to stay away.Every year, millions of Iranians travel to the Iraqi city of Kerbala for the Arbaeen rite, which marks the conclusion of a 40-day period of mourning for Imam Hussein, the Prophet Mohammad’s grandson.

This year, Arbaeen falls on September 16 and 17.

“The Iraqi border has been sealed off. Iranian citizens must postpone travel to Iraq till further notice due to safety concerns “Majid Mirahmadi, Iran’s deputy interior minister, was quoted as saying on state television.

Iran has reportedly stopped all flights to Iraq “until further notice” due to the escalating unrest, according to state television. “Iranians who are currently waiting at the airport to be flown back to Iran from Iraq and Baghdad are our priority. We intend to remove them today “A top aviation authority was quoted by state TV as stating.

Four missiles reportedly struck a residential sector in Baghdad’s protected Green Zone, according to Iraqi security personnel, according to Reuters.

Heavy fighting broke out overnight in the Iraqi capital after Muqtada al-Sadr, a prominent Shia cleric, announced his intention to leave politics. This prompted his supporters to attack the palace of the government and engage in combat with other parties.

10:00 – US embassy states Iraq’s security and sovereignty “should not be put at danger”

Iraq’s turmoil has drawn criticism from the US embassy there, which also called it “disturbing” that Iraqi institutions were not being permitted to function.

“The safety, stability, and sovereignty of Iraq should not be in jeopardy. The time has come to resolve issues via discussion rather than hostility, the embassy declared in a statement on Monday.

Iraqis should “respect the institutions and property of the Iraqi government, which belong to and serve the Iraqi people and should be permitted to function,” it continued, despite the fact that they have the right to protest.

Former leader of the independent Kurdish region of Iraq, Masoud Barzani, has pleaded with all sides “not to use the language of weapons and violence in resolving issues.”

According to a statement he made and as quoted by the Iraqi News Agency, INA, “We are following the current events and developments in Iraq with concern.”

Additionally, Barzani urged all parties to “explore options that benefit the Iraqi people and take into account the overall interest of the people and the country.”

The situation in Iraq is being “followed with worry,” according to UN Secretary-General Antonio Guterres, who urged all parties to exercise “calm and moderation” and “take immediate actions to de-escalate the situation and avoid any violence.”

In a statement, he urged “all parties and actors to forcefully push themselves to rise above their differences and to join, without further delay, in a peaceful and inclusive discourse on a constructive path forward.”

Additionally, the European Union asked all parties to “exercise the utmost moderation.”

The organization stated that it “reiterates its steadfast commitment to Iraq’s security, stability, and sovereignty.”

05:00 – Kuwait urges its citizens in Iraq to leave

The situation in Iraq is being “followed with worry,” according to UN Secretary-General Antonio Guterres, who urged all parties to exercise “calm and moderation” and “take immediate actions to de-escalate the situation and avoid any violence.”

In a statement, he urged “all parties and actors to forcefully push themselves to rise above their differences and to join, without further delay, in a peaceful and inclusive discourse on a constructive path forward.”

Additionally, the European Union asked all parties to “exercise the utmost moderation.”

The organization stated that it “reiterates its steadfast commitment to Iraq’s security, stability, and sovereignty.”

The pace of events in Baghdad seems to be slowing down. The AFP and Reuters news agencies estimate that between 15 and 20 persons have died. 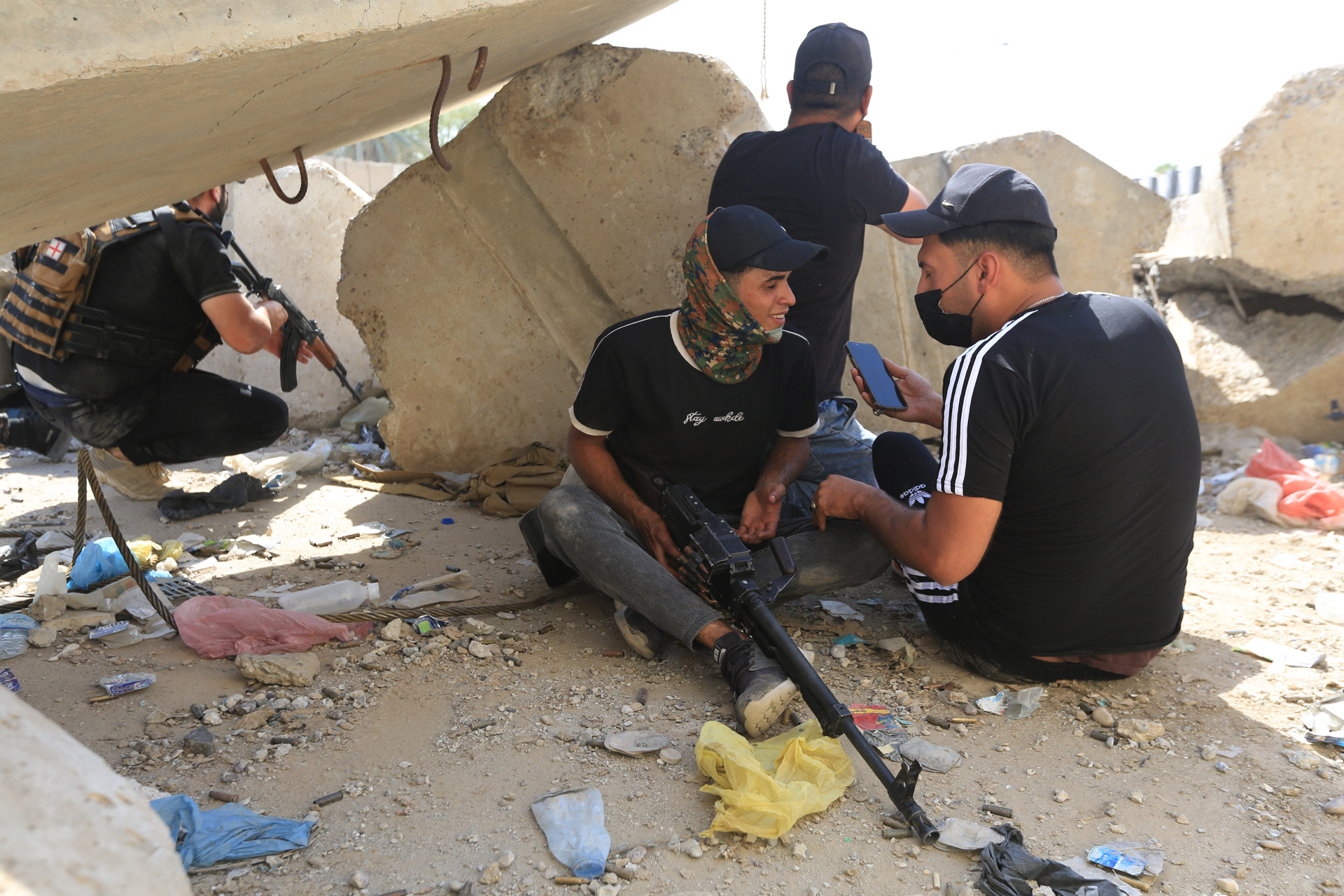 The heavily protected neighborhood in the center of Baghdad known as the Green Zone is where the events of Monday took place.

But it didn’t take long for the unrest to extend to Shia-majority areas in the south, where Sadr and his Iranian-backed adversaries both enjoy a sizable following.

Asaib Ahl al-Haq and Kataeb Hezbollah’s and other pro-Iran armed factions’ headquarters in Baghdad, Diwaniyah, and Basra were set on fire, mortar bombs were dropped on them, or they were just fired at.

In the southern Dhi Qar governorate, the provincial government building was also reportedly overrun by Sadr’s supporters. They allegedly did the same in the Wasit and Maysan governorates, as evidenced by graffiti that read “closed by the order of the people” on the Maysan governorate building.

According to a commander of Sadr’s Saraya al-Salam armed faction, protestors loyal to Sadr are caught in the gunfire in the Green Zone.

“Hundreds of demonstrators are confined inside. These folks were caught in the crossfire because they didn’t abandon their places “He told Suadad al-Salhy of MEE.

“We’re working to keep them safe. We won’t stop until our adversaries give up. They won’t give up, and neither will we.”

The commander informed MEE that some of Saraya al-most Salam’s tenacious combatants are presently battling in the Green Zone as part of the group’s “tactical regiment.”

According to him, “the forces of former Prime Minister Nuri al-Maliki, as well as those forces linked with the Popular Mobilization Security Directorate” are currently retaliating against them from inside the Green Zone.

Maliki established the Special Division, which is in charge of guarding the Green Zone. The majority of its fighters are from Maliki’s birthplace Tuwairej, a town 20 kilometers east of Karbala, and the Sadrists accuse them of being loyal to the leader of the Dawa Party, which is supported by Iran.

The Green Zone has been under heavy fire for hours from automatic weapons, guns mounted on moving vehicles, rocket-propelled grenades, and mortars.

The number of fatalities is unknown, but several federal police officers, including the chief, have been injured.

Many families of MPs and prominent officials reside in the Green Zone’s Qadisiyah complex, where residents are stranded and asking for a temporary cease-fire so they can flee.

On Monday, the Iraqi military imposed a curfew in Baghdad that was later extended to the whole nation.

However, video that is making the rounds online depicts armed faction of Sadr Saraya al-Salam racing towards the center of Baghdad in convoys of vehicles.

The majority of administrative structures and diplomatic missions are located in the guarded Green Zone, where Saraya warriors are stationed along the route leading from the al-Jumhuriya Bridge.

02:00 – As protests continue across Iraq, at least eight people killed

As Shia cleric Muqtada al-supporters Sadr’s demonstrate in Baghdad and other southern Iraqi cities in response to his declaration that he was leaving politics, at least eight people have been slain.

Following the declaration, supporters of Sadr started marching towards the government buildings in Baghdad’s Green Zone, a strongly protected area that is home to the parliament as well as other important institutions and embassies.

Late on Monday night, rockets began to drop inside the Green Zone, including close to the parliament building, and sirens were activated when a shell landed close to the US embassy.

Middle East Eye has confirmation from sources that Sadr has started a hunger strike until the use of weapons and violence is stopped.

By the end of the week, Lebanon anticipates receiving a formal proposal from US mediator Amos

After a week-long closure in protest of holdups by depositors demanding access to their savings, Lebanese

On the first stop of his two-day Gulf tour for talks on energy cooperation, German Chancellor

According to state media, the death toll from protests in Iran over the death of Mahsa