The status quo that emerged back then in the South Caucasus had created a frozen conflict that could escalate at any moment in the region for nearly 30 years. Even if the UN Security Council accepted resolutions on the immediate evacuation of the occupied territories of Azerbaijan by Armenian occupational forces, these decisions were not implemented.

Armenia has been the biggest loser of the continuation of the occupation in Karabakh. Yerevan has been left out of major regional projects for the past 30 years and has been pushed into isolation by its two important neighbors, Turkey and Azerbaijan. This strained the Armenian economy, made the country dependent on Russia, and brought it to a point where it almost lost its independence once again to Moscow.

Therefore, even after the war, Armenia was again the biggest loser of the status quo. The country, which had to withdraw from the places it occupied, lost a significant number of soldiers and weapons, and was hit by political instability after the outcome of the conflict.

Until the war, Russia seemed, undisputedly, to be the most important foreign actor in the region due to historical, cultural and economic reasons. Moscow, which keeps Armenia alive both economically and militarily as a state, has made Yerevan a member of its alliances over the years. Apart from this, the Russians, who have both land and air bases in Armenia, provided most of the weapons they normally sold to Azerbaijan for less than their original value or free of charge to Yerevan.

Even though Armenia was defeated when the war was over, it would not be wrong to say that Moscow left the war with important gains.

First of all, the Russian army returned to Azerbaijan after 27 years, even though it has done so under the name of peacekeeping. While the service period of the peacekeeping force can be extended to 5 years and its scope is 1960 soldiers, it is clear that Russia wants to stay in Karabakh for a longer period of time. In addition, the initial capacity of 1960 increased much more with the additional personnel under the name of various services.

Secondly, Russia managed to mediate a ceasefire in November 2020, thus having a say in the agreement. In this way, the control of the Lachin corridor connecting Armenia to Karabakh was given to Russian peacekeepers. In addition to this, the Russians pledged to protect the connection between Nakhichevan and Azerbaijan, also commonly known as the Zangezur Corridor. The Russians, who also took the promise to open all the blocked transport and economic routes, will thus obtain the land connection they lost with Armenia through Azerbaijan, due to their conflict with Georgia.

Finally, thanks to this agreement, Russia preserved the Armenian population in Karabakh, brought back some of those who had fled, and thus established a protectorate for itself. The biggest concern of the Azerbaijani side is that the Russian forces, seen in examples such as South Ossetia, Abkhazia, and Transnistria, will remain stationed in the same place for years to come, in order to control peace and ethnic tensions. Of course, the only way to overcome this is to somehow integrate the Armenians in Karabakh into the unitary system of Azerbaijan and to show the world that the region does not need any peacekeepers.

In addition, Moscow has entered as a mediator between the Azerbaijani and Armenian forces, which have come to the brink of hot conflict once again many times in border disputes that occurred after the war. In addition, the Russians, who practically showed the Yerevan government that they would be much weaker without Moscow, want to protect not only the Turkish border of Armenia, but also the Azerbaijani border. Seeing that Armenia has lost its previous positions one by one and retreated to its internationally recognized state borders, some in Armenia also welcome this Russian proposal. But, of course, such a development will only serve to turn Armenia into a proper Russian satellite state. The fact that the Armenian army cannot even protect its own borders shows once again that a wide reform is needed in the country.

According to some experts, the basis of the Russian pressure is Armenia’s desire to open up to the West under Pashinyan’s rule. Some even say that the Kremlin, which remained relatively silent during the war, punished Armenia with Azerbaijan’s hand. Russia, which could not overthrow Armenian Prime Minister Nikol Pashinyan as he consolidated his seat with the June 2020 elections, seems to have made it a priority to control his rule.

The only way out of this situation for Armenia is to improve its relations with Turkey. With the Second Karabakh War, Turkey returned to the region stronger than ever before. The Ankara administration, which provided full diplomatic support to Azerbaijan from the first day of the war, also stated that it could provide military support if necessary. Turkish-made unmanned aerial vehicles and modern equipment enabled the Azerbaijani army to advance much faster and more comfortably in Karabakh.

At the end of the war, it was understood that Russia was not the only powerful foreign actor in the region, thanks to the Turkey factor that formed in this equation. The two countries with conflicting interests in Syria and Libya, this time had to settle accounts in the Caucasus. Both the Turkish-Russian joint observation force established in Aghdam and the Turkey-Azerbaijan collective defence pact brought by the Shusha Declaration, signed during President Recep Tayyip Erdoğan’s visit to Karabakh, ensured Turkey’s presence in the Caucasus.

If Turkey is an external power that has strengthened its position at the end of the war and gained new successes, the opposite of this has been Iran. Iran’s foreign policy was questioned in the 1990s because of its support for a Christian-majority Armenia rather than a Shiite-majority Azerbaijan. The primary reason for this has been the strong ties Azerbaijan has with Turkey and due to the millions of ethnic Turks living in Iran. Tehran, which was afraid of a possible Azerbaijani victory and did not look forward to a strong and independent Azerbaijan Republic on its border, therefore continued to support the Armenians under the table.

The Iranian administration, which officially declared that it recognized the territorial integrity of Azerbaijan, practically provided the separatists in Karabakh with supplies, materials and gasoline, and in return, bypassed the American embargo and laundered its money in Armenian banks. Continuing to provide supplies even after the war was over, Iran has difficulty in accepting the new conjuncture. In the recent crisis, the refusal of customs fees by Iranian trucks, which passed through the Azerbaijani border and took commodities to Armenia and even in some cases to Armenians in Karabakh, increased the tension between the two countries.

Just after Azerbaijan gave a note summoning the Iranian ambassador to the Presidency, Iran started large-scale military exercises on the Azerbaijani border for the first time, which was not welcomed in Baku. Azerbaijani President Ilham Aliyev, in an interview on September 27, 2021, added that the truck crisis was perceived by them as disrespectful by Iran and that he found it “very interesting” that the exercises at the border were not during the occupation but right after it.

The support of Israel, another important actor in the Middle East before, during and after the war, strengthened Baku’s hand considerably. Azerbaijan opened its first official representation in Israel as a trade office after the war, though it is not in a hurry to open an embassy yet. However, like every state that supports Azerbaijan, Israel’s companies won many big project tenders during the reconstruction of Karabakh.

Despite all these developments, it is difficult to say that the dust has settled. First of all, the Zangezur Corridor and other important connection lines have not been opened yet. However, Azerbaijan’s call to restart relations with Armenia, added to the messages of rapprochement from Turkey and Armenia, are positive developments. Of course, it should also be noted that a peace agreement has not been concluded yet.

Considering that the Russian peacekeeping force has now changed commanders for the third time and that its last two commanders have served in the occupation of Georgia, doubts arise about Russia’s true intentions. The organization training in Armenian schools in Karabakh, expanding the barracks, distributing books and constructing new buildings by Russian ‘peacekeepers’ justify the concern that the mandate may be longer than anticipated.

In the Karabakh issue, where the Western powers were almost completely isolated, and cooperation between Turkey, Russia, and the countries of the region, instead of the Minsk Group of the OSCE, is a positive but complex development. Despite everything, it is certain that time is needed for the results and future of the Karabakh issue to be fully determined. 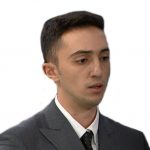 Turan Gafarli is a Researcher at TRT World Research Centre. He holds a Bachelor of Arts in History and Politics from Queen Mary University of London and a Master of Arts in Transnational Studies from University College London. Turan worked as a researcher for Lord German, Treasurer of the Liberal Democrat Party, in the House of Lords whilst also interning at the Turkic Council, the Council of Europe and the United Nations Office in Geneva. His research interests include Eurasia and Transcaucasia, the Turkic World, globalization and the nation-state debate. He also contributed to the book entitled 'Azerbaijan and the United Kingdom – 100 Years of Partnership (2019)' and is the editor of the upcoming book entitled ‘"The Karabakh Gambit: Responsibility for the Future." Turan is also a member of the Chatham House Royal Institute of International Affairs.